France, a country with a global outlook

International companies choose France because of its strategic position at the heart of Europe, the largest market in the world with 500 million consumers, and because of its membership of the euro zone, which offers the advantages of a single currency in 13 different countries.

With 65 million inhabitants, France is the second-largest consumer market in Europe after Germany and the fifth-largest economy in the world, with a GDP of US $2,670 billion in 2010. 80 million tourists visited the country in 2008.

While this makes France the leading tourist destination in the world, the country was also the third-leading recipient of foreign direct investment in the world in 2009, according to UNCTAD, receiving US $65 billion in foreign investment flows, second only the United States (US $136 billion).

In a global economy marked by an overall drop in foreign direct investments, the IFA and its regional partners in 2009 recorded 639 new job-creating foreign investment projects, nearly the same number as in 2008. The number of jobs created or maintained by these new investments was approximately 30,000.

France is the #1 investment destination in Europe

23,463 foreign companies currently have a base in France, employing over 2.3 million people, double the figure only 10 years ago. Foreign companies in France produce 40% of French exports and perform more than 20% of R&D conducted in France.

With more than 266,500 international students attending French universities each year, France 4th in the world after the U.S., Australia and the U.K.

Over 40% of the equity of companies listed on the CAC 40, the French stock exchange benchmark index, was held by foreign investors as of the end of 2008. In April 2007, Euronext (the pan-European stock exchange including the Paris stock market) merged with the New York Stock Exchange to create NYSE Euronext, the leading financial marketplace group in the world.

The A-Z of investing in France with the IFA->http://www.dailymotion.com/video/xmmknp_the-a-z-of-investing-in-france-with-the-ifa_news] par AFII

“The Maltese Government remains fully committed towards strengthening and further developing relations between Malta and France through a more flexible and dynamic approach that facilitates business while allowing operators to benefit from the many advantages that trade and investment our country has to offer” said the Minister for Finance Prof. Edward Scicluna.

Prof. Scicluna was speaking during the opening address to the Maltese French Chamber of Commerce conference titled “France: Why and How? This conference was held at the BOV Conference Centre on Thursday 16th October 2014 and was attended by members from within the French Maltese business community.

Prof. Scicluna explained that the strong political and economical ties between Malta and France have over the years been nurtured and sustained through regular political and bilateral relations. He added that the double taxation agreement which has been in place since 1983 has assisted in generating economic growth and encouraged further trade and investment between the two countries.

Minister Scicluna highlighted the fact that over 116,533 French tourists visited Malta in 2013 and that the total trade between Malta and France amounted to €4.95 billion, an average of €619 million per year. He added that exports to France amounted to 10% of Malta’s total world-wide exports.

Prof. Scicluna went on to add that the Government is working to foster better bilateral relations with France with regard to the gaming sector with the aim of improving and strengthening regulations within this ever evolving industry.

In his closing comments, Minister Scicluna reiterated that Malta has a lot to offer to the French investor and that notwithstanding a history of economic cooperation there is still room for an increase in trade and investment in a number of sectors. 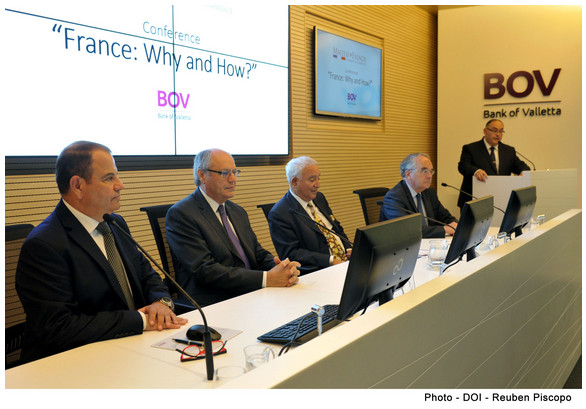 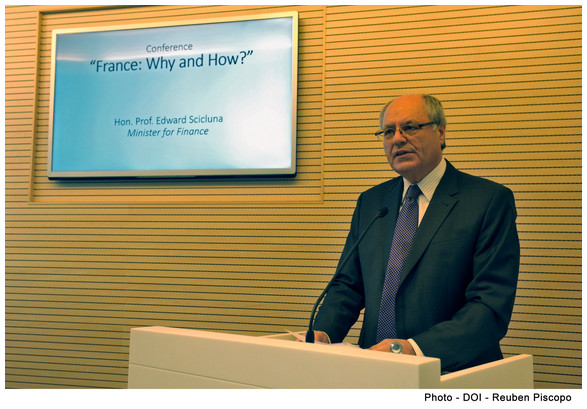 Details on conference "France, why and how?" on our website