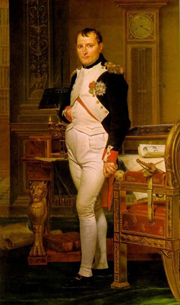 To Napoleon, Malta appeared as an important piece of his Mediterranean strategy. On 9 June 1797, his gigantic fleet, comprising of about 50,000 men and commanded by Admiral Brueys, set siege on Malta. As a result of the few troops available to Grand-Master Hompesch (332 knights, 3,600 men in the harbour and about 13,000 militia men from the countryside around), the siege was not to be more than more than a few cannonades.

On the morning of the 10th, French forces attacked simultaneously at four different spots and Hompech capitulated on 12th.

When Napoleon arrived, he stayed on the island at the Palazzo Parisio in Valletta which is today the seat of the Ministry of Foreign Affairs. During his very short stay (six days), he accomplished quite a extraordinary number of reforms, notably :

— The creation of a new administration with a Government Commission — The creation of twelve municipalities — The setting up of a public finance administration — The abolition of all feudal rights and privileges — The abolition of slavery and the granting of freedom to all Turkish slaves — On the judicial level, a family code was framed and twelve judges were nominated — Public education was organised along principles laid down by Bonaparte himself, providing for primary and secondary education. Fifteen primary schools were founded and the university was replaced by an ’Ecole centrale’ in which there were eight chairs, all very scientific in outlook: notably, arithmetic and stereometry, algebra and stereotomy, geometry and astronomy, mechanics and physics, navigation, chemistry

Many of these reforms instituted by Napoleon still exist in Malta today.