Home > Embassy > News > Diplomatic News > The Coalition for the Sahel: a collective and inclusive response

The Coalition for the Sahel: a collective and inclusive response [fr]

The serious humanitarian and security crisis in the Sahel, the sense of urgency, and the scale of need require stronger, more inclusive action. This is the goal of the Coalition for the Sahel. The Coalition aims to bring together, alongside the G5 Sahel, all countries, international organizations and institutions supporting security, stability and development in the Sahel.

The Coalition for the Sahel was announced at the Pau Summit on 13 January 2020 by the Heads of State of France, Burkina Faso, Chad, Mali, Mauritania and Niger, in the presence of the United Nations Secretary-General, the President of the European Council, the European Union High Representative, the Chairperson of the African Union Commission and the Secretary General of La Francophonie.

A new step forward was taken at the EU-G5 Sahel Summit on 28 April 2020, where the members of the European Council agreed to continue joint efforts to expand the Coalition for the Sahel to other international partners.

Today, all countries and organizations that wish to support stabilization and development in the Sahel are invited to join the Coalition. 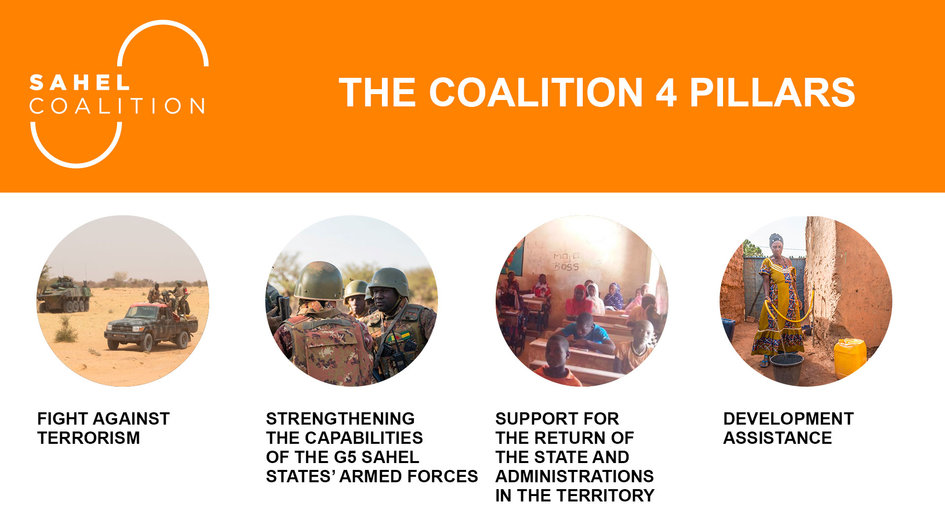 The Coalition aims to promote a comprehensive regional approach, including all levers and actors involved in the Sahel, whether they be security, political or development actors.

In a challenging security and humanitarian situation, this initiative offers a new framework for international action, across four complementary pillars, each of which is independently steered.

The aim is to fight against armed terrorist groups by coordinating all of the efforts led by African armed forces and the G5 Sahel Joint Force with the partners – Barkhane, MINUSMA, Takuba Task Force – with priority given to the Three-Borders region (Mali, Niger, Burkina Faso).

Faced with a poor security situation and the possibility of the threat expanding beyond the borders of the G5 Sahel countries, the aim is to create the conditions required for stabilization and development work.

This pillar is jointly led by the G5 Sahel states and France.

Pillar 2: Building the capacities of the armed forces in the region

The Partnership for Security and Stability in the Sahel (P3S), initiated by France and Germany, aims to identify security needs and increase efforts in the fields of defence and internal security, under EU coordination.

The second pillar works within this partnership to coordinate all the defence capacity building actions for G5 countries, such as training and equipment for national armed forces and the G5 Sahel Joint Force, including its provost component.

The European Union leads this pillar working in close connection with the G5 Sahel.

Pillar 3: Supporting the return of the State and administrations in the territory

As part of the effort to identify the priority needs of the Partnership for Security and Stability in the Sahel (P3S), the aim of this pillar is to support the redeployment of the State and strengthen internal security and justice capabilities, in order to consolidate stabilization efforts.

The European Union leads this pillar working in close connection with the G5 Sahel.

The fourth pillar aims to respond to challenges regarding employment, poverty, education, healthcare and infrastructure in G5 Sahel countries.

These contributions are managed by the G5 Sahel and Sahel Alliance (23 members including 10 observers; over 800 projects totalling €11.7 billion), in liaison with the G5 Sahel Executive Secretariat.

The Executive Secretariat helps to identify activities, ensure good coordination between actions and distribute roles and/or geographical areas thereby ensuring the overall efficiency of development work, in coherence with the political, security and military aspects.

These actions also contribute to the third pillar by supporting the return of government services and decentralization, so as to build confidence between public authorities and local people.

This pillar is jointly led by the G5 Sahel and the Sahel Alliance.